Another day of work on the beastie. The electrolysis made the rust come off very easily, so I was able to strip down both marquee retainers, the coin door frame and whatever that metal piece is that sits in the back of the cab in no time flat. Primed and painted everything but the frame. Now waiting for it to dry/cure.

More work on cleaning the outside. Very tedious, working in 6″x6″ squares, but it’s getting there. I need to pick up a Magic Eraser. I’ve heard they’re good on cleaning up the white areas, we’ll see.

Had to buy a tool, a “die” – what you would use to thread a hole, except I was using this to open the leg leveler threads back up. The cab now has levelers again for the first time in a long time.

Got to work replacing the old rusty worn-out screws with the new zinc plated ones.

Started investigating the wiring. Oddly hacked in a few places, I’ll have to see what’s what.

Last night I stayed up until 4am capping, cleaning and adjusting the K4600. It didn’t want to work correctly. Turns out I put two caps in the wrong spots. Reversed them and now I couldn’t get it to sync. Okay, well…I have another K4600, let’s see if the cards from that one can get it to display correctly…yes. Okay, now we’ve narrowed it down. XY card is fine on this, but the other, a P307 card, only accepts positive sync. Crap. Well, on Galaxian it should be okay, but I couldn’t get it to display a proper picture without the one from the other game.

Placed a florescent fixture in the marquee area that I picked up from the thrift store. It was one of those that didn’t have a starter but you hold the on button down it comes on. So I removed the button and soldered in a starter. If I had a starter socket I would have installed that, but I didn’t.

I think that’s it. More later.

The cabinet is still in storage, but since I knew the board has issues I brought it home to repair here in […] 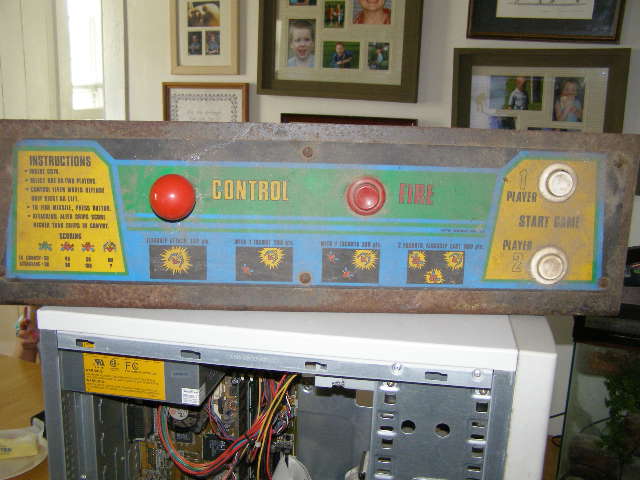 I’ve never had to do this on a CP before, but I’m going to have to fill in the rust pits with […]

It took two years to get my boards back. I wasn’t in a hurry. Another six months of holding onto it before […]

Rebuilt the K4600 today after my Mouser order showed up. Box was mangled, and I was pissed, but the contents were fine. […]