Guy I know calls me at noon and says “hey man, there’s a yard sale about a mile from you…they’ve got a game out front. Something called ‘Nova 2001’. Thought you might be interested.” I check it out in Mame…meh, it’s okay. But with all the games I’ve got that need repair I figure maybe I could use it for parts. Depending on what it was.

But I was right in the middle of something and couldn’t get to it right away. An hour later another guy I know calls me and tells me about it. I quickly clean out my mini van, get my hand truck, and head over to this guys house.

It’s right on his front lawn. Sure, it’s Nova 2001…but it’s in a Stargate cabinet. It even still has the Stargate bezel. Kick ass! Hm…asking $100…bet I can talk him down, especially since it’s been sitting there for a few days and I know they just want it *gone*.

But he’s not home. Crap. Okay, go back home, play with the kids for a couple hours, and head back over.

This time he’s home. I look it over, then I say “I’ll give you $40 for it.” His face just fell. He then tells me that a guy on a motorcycle just looked at it and offered him the full $100, but had to go get a truck. Offers to take my number and let me know if it falls thru.

Motorcycle guy calls as I’m handing him my card. Asks if he can deliver. As he’s talking to the guy I say “I’ll give you $60 for it right now, you don’t have to deliver, I’ll just load and go.” He puts down the phone and says “Can you do $80?” I agree. I hand him money, and load the game in my van.

It’s remarkably unmolested. The Stargate PS is still in there powering Nova 2001, and even the Stargate manual was in the bottom. Nova 2001 is a one button game, but instead of sealing over all the buttons they linked them all together and used the old leafs. They did seal the joystick hole with Bondo, but that’s easily remedied.

Finally assembled a boardset, complete with metal mounting board. Tested it in my Defender. Didn’t come up. I suspect a RAM problem. […] 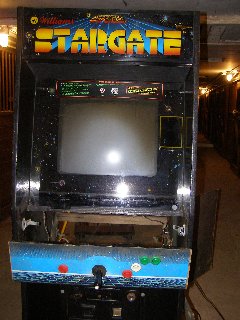 I’ve been getting pieces for this here and there. eBay is good for Williams parts. Installed the marquee. That’s the extent of […]

I don’t know if any of you guys know, but Home Depot closed down 11 of their stores. One of them was […]

I’ve actually started sourcing parts for this beastie. Bought a Stargate ROM board off eBay yesterday.