A week ago yesterday I brought this home with me. I saw it advertised on Craigslist under a yard sale ad as just ‘arcade game’. Emailed him about it, found it was a cocktail (!!!) and he only wanted $60 for it.

Drove down, started @ 6am. Got lost in the city he lived in, figured someone would have jumped all over it. Finally found the house, people swarming all over it. Thought I was too late.

Lucky me, they hadn’t even brought it forward. It was on the back porch. Different design than I’ve seen before. And the best part was he only wanted $20 for it! Non-working, but I can deal with that.

Then the bad: tipped it slightly, WATER started pouring from it. Apparently it had been on the porch for a week, and it had rained during that time. 🙁 Luckily this thing was built to last, there was NO water inside. The water that was pouring out came from a recess under the control panels.

Got it home, started checking it out. I thought it had a 19″ K7000, but it’s a 13″. Booted okay on first try, but an hour later I tried again and it wouldn’t. Chalk that up to a dead power supply. Swapped that out and it’s running 5×5. Controls are crappy, but that’s no surprise considering they were submerged in water for an extended time!

Found a TV on the street a few months ago. Screen was the same size as the cocktail, so I thought I’d […]

Took apart the control panels, since I couldn’t get either to do anything. The optics were waterlogged. Once I got that dried […] 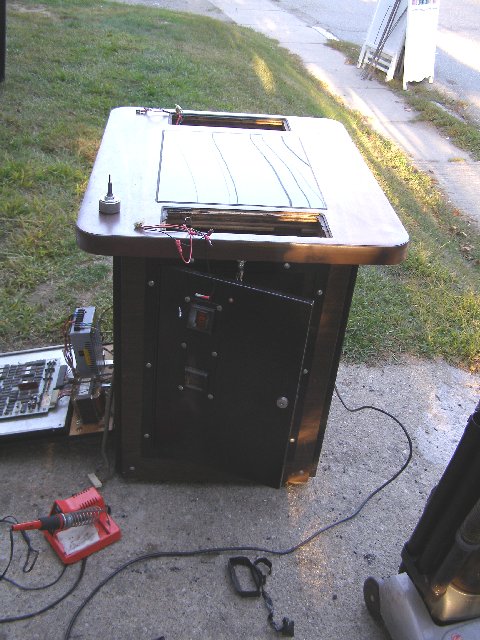 It occurs to me that I’ve never posted pictures of this one before. I want to sell it, so I cleaned it […]